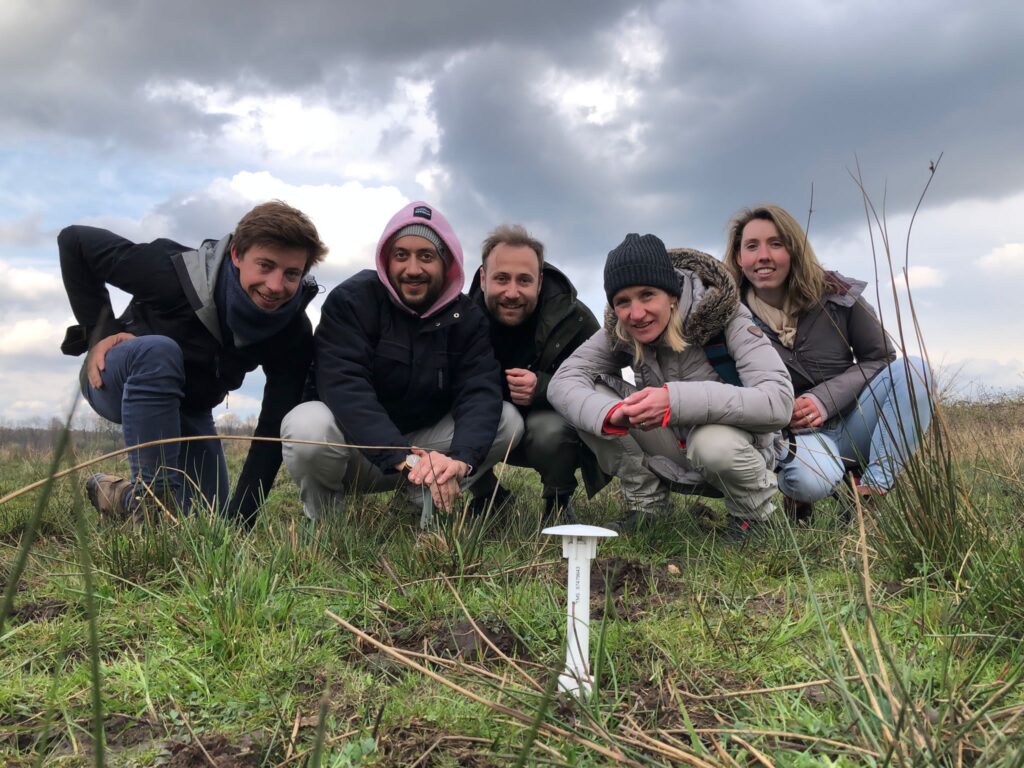 The last week of March 2022 was an exciting time for our EJWP3 group! We met in Mechelen, Belgium, at the headquarters of Training Week host organization, Natuurpunt. Mechelen is a small picturesque town just 20 kilometers north of Brussels, which provided an ideal setting for the range of activities that we experienced.

Our EJWP participant host from Belgium, Lander Wantens, first introduced the organization Natuurpunt and its projects. After the kick-off meeting, we toured Mechelen, with its revitalized city water canals. It was indeed fascinating to see how the city is once again crisscrossed by water channels that were invisible for years, and how a harmonious relationship has been established between these urban aquatic ecosystems and the surrounding population of Mechelen. “Mechelen is a wonderful example that could be emulated in our Dutch cities,” said Isabella de Bok, our goup participant from the Netherlands. We later concluded Day 1 with a networking dinner at a local restaurant, which turned out to be a good warm-up for what was to come in Day 2.

On Day 2, we were joined by EJWP trainers Jennifer Cronick and Filip Grisar. Under their guidance, we embarked on an intense day of personal development training on communication, collaboration and co-creation. We spent the morning assessing our own social types and the way we deal with personalities who are the opposite of us. The afternoon was for role-playing our own examples to practice how we interact in our everyday social situations, deal with other points of view, and understand the complexities of solving communication  problems in our daily lives and work. “This was challenging, but also a fun and educational activity through which we were able to take another look at our strengths and weaknesses in everyday communication,” said Dimitris Kofinas, our group participant from Greece.

Some things we learned: Lander realized through the exercises that he had already communicated with challenging interlocutors, and concluded that he became aware of potential pitfalls when communicating with authoritarian types. Isabella and I agreed that a full day of training focused on testing the limits of our own personalities was both exhausting and liberating – especially because it helped in useful negotiation techniques. Day 2 concluded with dinner with our patient coaches, and a sampling of Belgian specialties, including the local Gouden Carlous beer.

Day 3 served as a review of our AquaFed project collaboration so far. In this project, we tackled the problem of missing data on the performance of water utilities and the connection between customers and water service providers, including through a survey on the use of social media to better connect. “This was a great opportunity to talk openly about the challenges we encountered while working on our first project that took place entirely in a virtual environment,” said Nikos Mellios, also a Greek colleague. In the afternoon, Nikos and Dimitris left the training with EJWP Director Naomi Timmer to coordinate the SMARTEN project workshop “Blended Workshop on SIM4NEXUS Serious Game” in Brussels, which was part of the Water Market Europe 2022 activities.

Lander took us into Day4 with a presentation of the citizen science project, led by Natuurpunt and supported by the University of Antwerp. He briefed us on our planned field work and including installing environmental sensors to measure soil and air temperature and humidity in urban and natural watersheds. We spent the afternoon with the help of a Natuurpunt volunteer installing 15 sensors in conservation areas – forests, grasslands and marshes – as part of Natuurpunt’s Wetlands4Cities project.

On Friday morning, the last day, we came full circle by setting the course for our new group project, which will focus on Natuurpunt’s citizen science campaign. We will study the impact of watersheds on the microclimate of surrounding urban areas over the next few months. We all agreed that this will be a new adventure and an opportunity to sharpen our collaboration skills in co-creation, as well as to learn about the benefits of citizen science campaigns, particularly in examining the role of watersheds in mitigating the effects of urban heat island and related issues.

At the end, we all agreed that this was a dynamic week that immersed us in our exciting new project.

New EJWP2 Project: Toward an Inclusive Water-Smart Society in the Future Workplace

Creating Our Future Water Workplace Together in the New Waves Festival

Interviews, Workshop and More in EJWP3 Project Supporting Cooperation in the Water-Food-Energy Nexus

Going “Over the Hoop” to Inspire Solutions